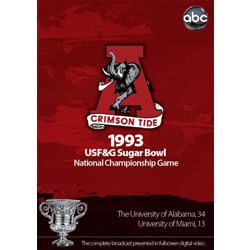 On January 1, 1993 the USF&G Sugar Bowl featured a classic matchup between two of college football's fiercest powerhouses, the Alabama Crimson Tide, led by legendary head coach Gene Stallings, and the Miami Hurricanes. The New Orleans Superdome played host to this epic battle in which the Crimson Tide 'rolled' over the Hurricanes with a staggering 34-13 victory to claim the school's 12th national championship.