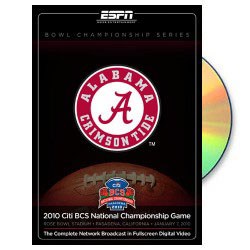 THe no. 1 ranked Alabama football team beat NO. 2 Texas in the BCS Nastional Championship game, played in the Rose Bowl on Thursday January 7, 2010. The Tide won 37-21, optaining the 13th national title in school history, and the first since 1992. With the win, head coach Nick Saban became the 5th coach to bring a national championship to the Capstone.