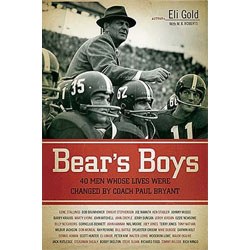 Bear's Boys is a collection of inspiring stories featuring 40 men whose lives were altered by their encounter with the legendary coach while they were players and coaches at Alabama. The stories of star players such as Joe Namath, Ken Stabler, Marty Lyons, Bob Baumhower, Cornelius Bennett, and Gene Stallings show how the Coach forever changed them as young men and ball players on the field and later in life after football.
When Bob Baumhower was released from the Dolphins in 1986, he immediately did what Coach Bryant would have done: he made a plan. Instead of feeling sorry for himself, he snapped into practical mode. First, he sold his boat and his big house. Then, he systematically began exploring business opportunities and setting goals for the next several decades of his life. When he started his first restaurant, he knew he had yet another chance to apply the principles he learned on the football field in real life. "Coach Bryant said there's a lot of blood, sweat and guts between dreams and success," Baumhower said. "That's true in the restaurant business. . . . Today, every success I have, every win that I have, in my opinion, came from the fact that Coach Bryant cared enough to talk to me and turn the light on for me
Includes stories for such men as 1) Gene Stallings 2) Bob Baumhower 3) Dwight Stephenson 4) Joe Namath 5) Ken Stabler 6) Johnny Musso 7) Barry Krauss 8) Marty Lyons 9) John Mitchell 10) John Croyle 11) Jerry Duncan 12) Leroy Jordan 13) Ozzie Newsome 14) Billy Neighbors 15) Cornelius Bennett 16) John Hannah 17) Mal Moore 18) Joey Jones 19) Terry Jones 20) Tony Nathan 21) Wilbur Jackson 22) Don McNeal 23) Ray Perkins 24) Bill Battle 25) Sylvester Croom