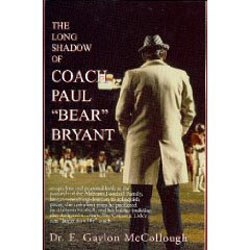 The Long Shadow of Coach Bryant by Gaylon McCollough

He was many things to many people. To his immediate family, he was "Papa". To his friends, he was "Paul". To his football family, he was "Coach Bryant". To the masses, he was affectionately known as "Bear", a nickname that he never really cared for. Regardless of the moniker to which he answered, the man grew to be larger than life. More than a quarter of a centruy since he was laid to rest, Coach Paul "Bear" Bryant's imposing shadow still lingers over The University of Alabama, its storied football program, and the sport that he changed - for the better - forever. Revealed for the first time in The Long Shadow ... are some of the questions and mysteries behind Coach Bryant's decision to relinquish power and the troubling times he predicted for his beloved university. Reasons for the revolving door of coaching changes - and the negative impact that uncertainty has had on the University of Alabama's football program - are at long last brought to bear. You will better understand why Paul Bryant's extended football family and a traditional football juggernaut have found balancing the glory days of the past with the hopes and visions of its future, a bitter-sweet order. Whether a player, coach, or fan, you should come away from reading this book with a greater appreciation for the enduring impact that one man of vision can have on a society. You will also see how the sudden absence of such an individual creates an abysmal vacuum, an emptiness that can only be filled if - or when - another larger than life legend emerges from the shadows.