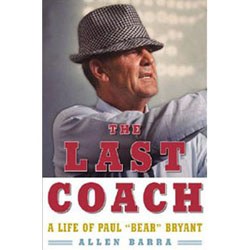 Allen Barra's The Last Coach traces Paul Bryant's rise from a family of truck farmers to recognition as the most successful and influential coach in the game's history. The eleventh of thirteen children, Bryant was born in tiny Moro Bottom, Arkansas in 1913 and grew up in nearby Fordyce where his legend was born when he wrestled a live bear on the stage of a local theater. Paul was raised by his mother, who barely managed to keep him out of trouble and on the Fordyce High School Redbugs long enough to get a football scholarship at Alabama, where he would meet and marry the love of his life, campus beauty queen Mary Harmon Black.
At the height of the Depression, football took Bryant to the Rose Bowl with Alabama's 1934 national champions and on to a career as an assistant and, finally, a head football coach, where he matched wit and grit with the greatest coaches of two generations, men like Tennessee's General Robert Neyland, Oklahoma's Bud Wilkinson, Notre Dame's Ara Parseghian, Ohio State's Woody Hayes, and Penn State's Joe Paterno. Along the way, he stirred controversy with his infamous "Junction Boys" training camp in 1954, during which almost two-thirds of the Texas A&M football team quit; his legal battle with The Saturday Evening Post over the accusation that he had conspired to fix a college football game, a trial which rocked the sports world; and his pursuit of Amos Alonzo Stagg's all-time record for college coaching victories.
Through it all, Bryant's influence has not only endured but prevailed as his former players and assistants continue to define the best in not only college but professional football. 32 pages of photographs.