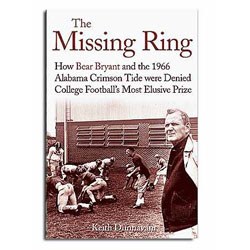 The Missing Ring by Keith Dunnavant

The Missing Ring: How Bear Bryant and the 1966 Alabama Crimson Tide Were Denied College Football's Most Elusive Prize

Very few institutions in American sports can match the enduring excellence of the University of Alabama football program. Across a wide swath of the last century, the tradition-rich Crimson Tide has claimed twelve national championships, captured twenty-five conference titles, finished thirty-four times among the nation's top ten, and played in fifty-three bowl games.

Especially dominant during the era of the legendary Paul "Bear" Bryant, the larger-than-life figure who towered over the landscape like no man before or since, Alabama entered the 1966 season with the chance to become the first college football team to win three consecutive national championships. Every aspect of Bryant's grueling system was geared around competing for the big prize each and every year, and in 1966 the idea of the threepeat tantalized the players, pushing them toward greatness. Driven by Bryant's enthusiasm, dedication and high standards, the players were made to believe in their team and themselves. Led by the electrifying force of quarterback Kenny "Snake" Stabler and one of the most punishing defenses in the storied annals of the Southeastern Conference, the Crimson Tide cruised to a magical season. But Alabama finished with a dubious distinction: Undefeated, untied and uncrowned.
Set against the backdrop of the civil rights movement, the still-escalating Vietnam War, and a world and a sport teetering on the brink of change in a variety of ways, The Missing Ring tells an important story about the collision between football and culture. Ultimately, it is this clash that produces the Crimson Tide's most implacable foe, enabling the greatest injustice in college football history.